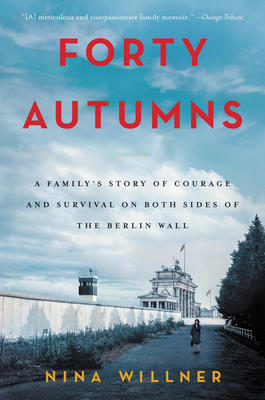 In history class in high school, I remember dreading the part in the textbook where we'd have to learn about the Cold War. To me, it wasn't very interesting to learn about communism and it wasn't really a war. It was basically two large nations trying to "out-build" the other in atomic bombs and scare each other with them. And it was who could do what in space first.

To read someone's account of what living behind the Iron Curtain was actually like was eye-opening. It was heart-breaking. In textbooks, you don't read many personal stories. I recognized most of the names who held political offices, but this was so so so different.

The author, Nina Willner, writes mostly about her mother's life. The book begins just days after WWII ends and her mother, Hanna, and her family are waiting for her father and family and other residents of the little German town that the Soviets are coming to take over, but if you come with us to the West, you'll be free. Hanna's mother tells Hanna she must leave and try to make a life for herself. Hanna reluctantly agrees, and gets on the American trucsk and as it gets farther and farther away, Hanna changes her mind, jumps off the truck, and heads back home.

And so the reign of communism begins. Hanna eventually escapes into West Germany leaving her family behind. Throughout the story, Hanna hardly ever gets any word through to her family. And as communism grows ever more powerful, the letters get fewer. It's quite the book. Willner mirrors her family's story of survival with what was happening politically in an interesting way. It was very easy to follow what was happening; her maps and timelines at the start of the book also being extremely helpful.

But at the heart of the book, is hope. Hope that Hanna will be reunited with her family again. Hope from Hanna's mother that the family will see each other again, even if she doesn't live to see it. Hope that East Germany will crumble. It's beautiful. And it's truly a great story.

For more information on Forty Autumns by Nina Willner, visit our website here.
at March 17, 2018