I would like to go on a little bit of a different vibe here and introduce you to some biographies and/or life stories that are new on the shelves here. I haven't actually read any of them, which is not my style, I know. I don't like to recommend a book unless I've read it personally. But I can vouch for my co-workers, and they speak very highly of these here, advertised in our Christmas Gift Guide this season! Have a look.

Worship leader and recording artist Laura Story was faced with her worst fear - her husband, Martin, was diagnosed with a brain tumor. Her story stresses God may not fix everything. In fact, your situation might never change or get better. But you can get better regardless of your situation.

The remarkable story of how one man, armed with belief in his divine destiny, embarked on a course to save Christian civilization when Adolf Hitler and the forces of evil stood opposed. It traces the personal, political, and spiritual path of one of history's greatest leaders and offers hope for our own violent and troubled times.

In sharing his own story of being a commited believer who struggled with same sex attraction early in his life, author, husband, and father Alan Chambers will help you understand the issues from the inside. This is a book for everyone who wants to be welcoming and loving to all people without compromising their faith or their biblical theology.


If you need inspiration, or information, or something to encourage you specifically, these could be for you. I can't tell you what you'd enjoy personally, but hopefully this helps you determine that for yourself.

This is a book that robs me of breath, captivates me, mind, heart and soul, and continues to draw my thoughts days after I've finished reading. It's the kind of book that stays with me, for better I hope, and in some ways, it gives me courage.

A.D. 33 follows Ted Dekker's last book, A.D. 30 - the story of Maviah, Queen of Desert Outcasts and desolate daughter of the overthrown sheikh of Dumah. In the previous book, her desperate search for help and strength took her to kings - to Aretas in Petra, and to Herod in Rome. But A.D 33 begins when she has found strength in her own people - in the Bedouin tribes of the desert that desire to overthrow the Thamud ravaging their capital.

The Thamud, who hold Maviah's lover, Judah, and her father, sheikh Rami, in the dungeons of her homeland. Like criminals.

But this book is as much about Maviah as it is about Yeshua. If not more so. This Yeshua, this prophet, this zealot, this god - he teaches a Way so foreign to the tribes of the desert. He teaches a Way so different from an eye for an eye. And Maviah draws power from this man's teachings. Together with Saba, she journeys back and forth from the desert to Jerusalem, to Bethany, where she might find grace and strength and saving in this man of Nazareth. He is the Way, and both Maviah and Saba long to follow him, and to trust him.

And what better effect could a writer hope to establish in his readers? Angela Hunt comes at the story of David and Bathsheba from a perspective that is difficult to consider and even harder to come to terms with.

And she does so beautifully, with engaging passion.

Bathsheba's character is stunning, enticing, engaging, and everything I could have hoped for. Hunt follows the story line from the Bible, and then she elaborates on ideas and assumptions and vague hints. Because, just like with her rendition of Esther, there are very few details given on these characters' intimate lives - what it was like for them at the time. The bony, skeletal structure of the story is there, but Hunt has to imagine a lot of the rest.

And what an imagination she has.

She starts with Bathsheba, young and pure, a beautiful young woman with a beautiful future ahead of her, and she jumps back and forth between her point of view and the point of view of Nathan the prophet. Both tied together from the start, their lives intersecting here and there. King David is not really introduced at all until about halfway through the book.

What really gets me about this Dangerous Beauty series is the raw emotion within. Hunt goes to such lengths to identify and describe the emotions and mental states of these characters. The series itself doesn't follow any particular order, but rather a theme: the power, and especially the danger, in the beauty of a woman. Not a power to be used as a weapon - though some might choose to do so - and not a danger to be seen as a curse - though some might have no other perspective.

Hunt's writing appeal lies not in what happened - the Bible covers as much - but in how it could have happened. The "what if?" to the unanswered questions; the hidden details. And she has a gripping perspective and a raw emotional grasp on these particular stories. She can drive a reader to want to read the Bible more, even more in-depth - that is her intention, and I know that she succeeded with me.

For more information on Bathsheba by Angela Hunt, visit our website here.
at November 09, 2015 No comments:

There are so many good things just flooding into the store, I feel the need to share! From some particularly excellent authors, we're getting some sequels and series finales, and some more standalone novels. Now, I am still biased towards fiction in particular, so that is my focus. But not to worry. Non-fiction is still making a rise in the bookshelves of my mind. More on that at another time.

For this post I would like to feature a few New Arrivals. Yes, in Fiction. In Historical Fiction, if you want to get really precise. 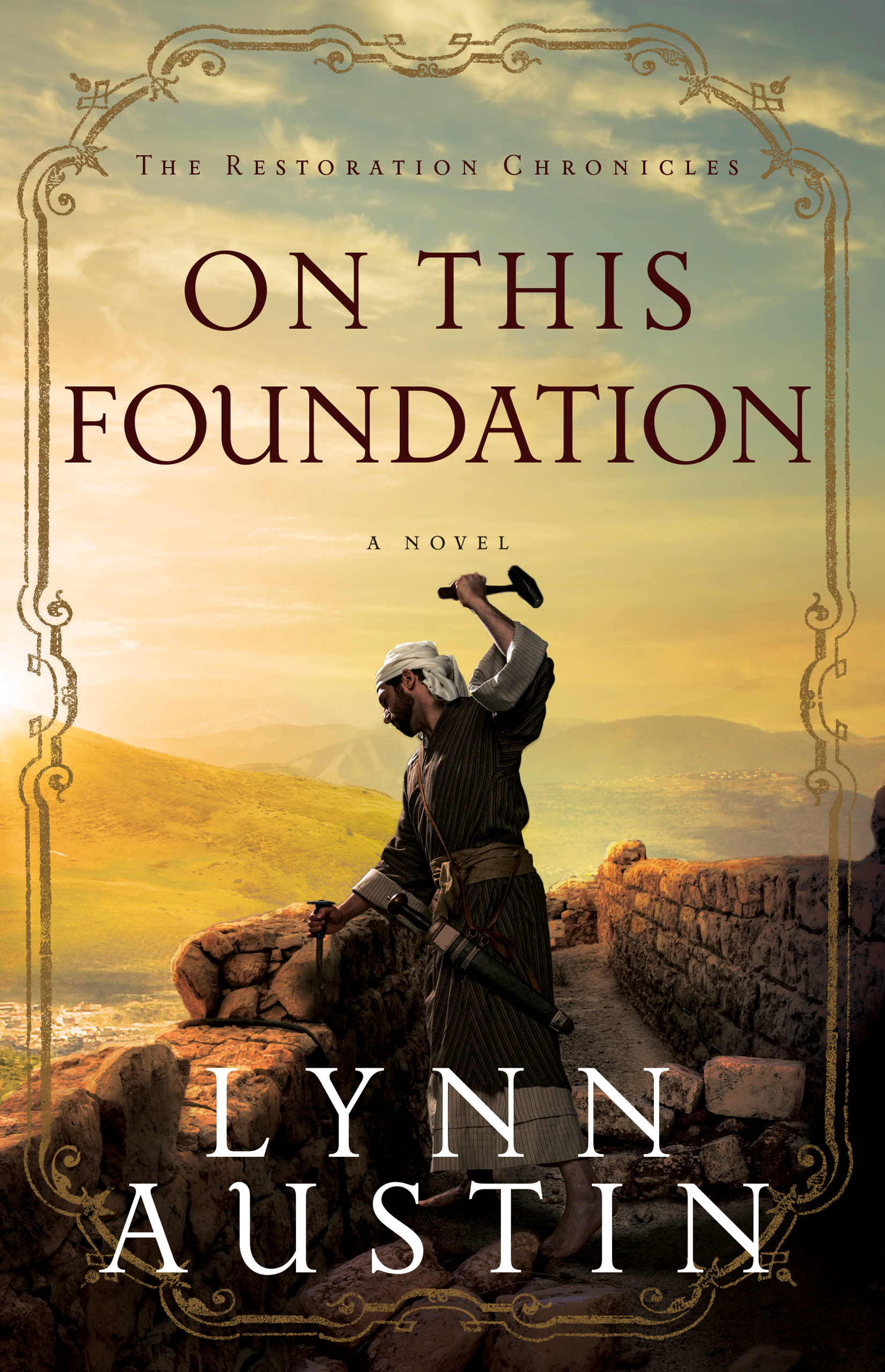 This one here is eagerly awaited; Lynn Austin's conclusion to The Restoration Chronicles. If you're into historical Christian fiction, this is the author for you. It would be a surprise if you hadn't heard of her already.

"Travel with Nehemia to Jerusalem to rebuild the city's broken walls. Lynn Austin affirms faith in the midst of oppression, and hope that, in spite of appearances, the gracious hand of God is upon those who believe. Her novels continue to set the standard for biblical and historical fiction."
--Becky

Now, keeping with this theme, Angela Hunt is back with another novel about another queen. This time, Bathsheba.

I'm right in the middle of this one, and I stand once again amazed. I'll address it more fully once I've finished, with a post of its own. For now, just know that it is worth the time. It is the second book of Hunt's Dangerous Beauty series. Esther was the first, and Hunt is currently working on Delilah. I would consider this a worthwhile read in the meantime.

Following the story of David and Bathsheba from the Bible, she elaborates with cultural clues and historical hints to make the brief account come alive with character and emotion and terrifying speculation. Angela Hunt surely has a way with her own style of historical fiction.


And now for a personal favourite of mine, Ted Dekker is one of those authors where I started with one of his books and then I had to read them all. His Circle series has had me hooked from page one.

A.D.33 is the sequel to A.D.30, following the story of Maviah of Dumah. Outcast. Rejected. Nothing but a woman under the law of men. She is desperately trying to unite her people to fight back against their oppressors; to save her father and the man she loves, held captive by the enemy that overthrew their kingdom. And in the process, she comes face-to-face quite literally with the Lord Jesus Christ himself.

Though she does not understand who he is at the time.

Dekker's speculation and portrayal of the time period and the characters therein is spectacular. His depiction of Jesus is breathtaking - awe-striking - and I cannot wait to crack this novel open and devour whatever happens next. I've been desperately awaiting this release since I finished A.D. 30 and I already know that I will not be disappointed.

I must say, this is just an exciting season for readers of Christian fiction everywhere. You can expect a breathless, full account of Bathsheba and A.D.33 from me in the coming months - there is no way I can help myself, and I won't apologize either. Prepare to be amazed.

For more information on these books, and many, many more, visit our store website here.