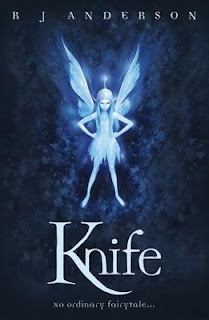 Definitely a new kind of "fairy" tale--quite literally! Knife, by R. J. Anderson is the first installment in a three-part series about a race of faeries that make their home in a monstrous oak tree, and the way their lives intermingle with the human society around them.

The young faery in this tale is a fierce, independent soul with an unquenchable thirst for adventure. She goes by several different names in the story, but Knife is the name that she holds most dear. As the youngest faery in the Oakenwyld, the area of the humans' backyard the Oakenfolk call their home, Knife is at the mercy of every other faery in her home. Bargaining is the only way to make anything happen in this culture, and she must bargain the worst of the chores around the Oak for anything and everything she needs or wants.

When the Queen calls her to ceremony to receive her lifelong task or career, she's completely surprised--and eventually delighted--to be named Queen's Hunter. The Queen's Hunter is one of the only faeries allowed outside of the Oak, and Knife has always dreamed to fly free in the open air ever since she was small. But with her position comes a great deal of responsibility and danger, and it takes everything Knife is to keep herself and the dwindling population of her fellow Oakenfolk alive.

R. J. Anderson weaves an exciting and mysterious story--her characters struggle with their reality as they unravel the past they thought they knew and discover secrets that were perhaps best left hidden away. Knife must learn how to fend for herself, how to fight for herself, and then she must learn how to let down her guard and trust, time and time again, which is no easy task for someone so independent.

Anderson does a fine job of defining and intertwining cultures, individuals, and life experiences. She writes with a lyrical prose, and the grace and compassion of a woman wise beyond her years. I wouldn't be surprised if I snatched up anything and everything she ever wrote, from now until the end of time.

For more information on Knife by R. J. Anderson, visit our website here.
at April 28, 2018