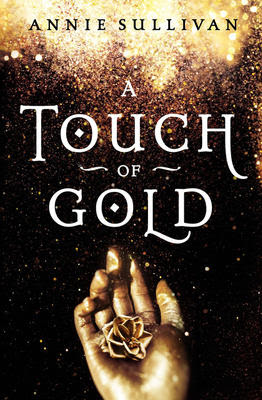 Any story that starts this way with those four little words, it is guaranteed that I'll love it or at least like it a lot. I grew up watching Disney movies and reading out of all of our fairy-tale books over and over again till the pages started falling out. I don't know what it is about them, but I love them. I love the adventure, the princesses and princes and frogs, and pirates and treasures and all of it. So when I picked up this book and it started with those four little words I love so much, I knew I had to keep reading to see if it was actually any good.......it was!

If you know anything about King Midas then you're good to go in reading this story. If you don't, then basically its a myth about a king who wishes that he could turn anything he wants to gold. But Dionysus, the god who gave him this "gift", or curse, tricked him: literally everything he touches turns to gold. That's the gist.

Our story begins right before that curse is lifted, when King Midas accidentally turns his daughter, Kora, into gold. After searching out Dionysus to save his daughter from her dreadful fate, the god tells Midas to bring everything he's touched, including his daughter, and go to the mouth of the nearby river before the sun sets that day and submerge everything. And his daughter would be saved. So Midas does this, but in his hurry he forgets everything except his daughter. When the sun sets, Kora is alive but her skin is still a shimmering gold.

And that is only the prologue!

Flash forward ten years and Kora feels like she's never going to find a man to marry her who won't shudder when he looks at her and that she's never going to escape the walls of the palace where her Uncle Pheus and her father keep her locked up. But when a suitor shows up and doesn't recoil when he looks at her, Kora finally begins to have hope that her life won't always be in hiding.

When the palace is robbed of the cursed gold that Midas touched, and needs for survival, Kora sets out with her suitor, to bring back the gold to save her father and the kingdom. As they slowly begin to get to know each other, Kora finds out that people aren't always as they seem.

This book was exactly what I needed after reading several books about WWII and the Holocaust. It was an easy read and swept me away into a fanciful land of pirates and curses and a damsel who starts out in distress but finds her own strength and it's all great. This is Annie Sullivan's debut novel and I give it two enthusiastic thumbs up!

For more information on A Touch of Gold by Annie Sullivan,come in and see us or visit our website here.
at September 13, 2018