Salt to the Sea 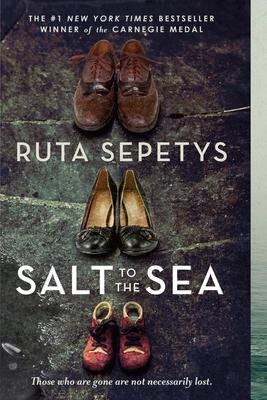 Salt to the Sea by Ruta Sepetys was truly a heart-breaker. I keep telling myself that I need to take a break from the historical fiction and read a simple light fiction or fantasy book; read something that can't possibly be real, because my heart can't handle what the last few books I've read have made me feel. But I'm addicted. So, oh well.

Salt to the Sea takes place in winter 1945 and follows four characters whose lives are crossed in the desperate attempt to flee to the coast from Stalin and his soldiers: Joana from Lithuania, Florian from Prussia, Emilia from Poland, and Alfred from Germany. All four fight for passage aboard the Wilhelm Gustloff, a ship that will transport them to safety and freedom...maybe.

And that's all I'm telling you because I don't want to give anything away.

Most WWII books I've read have been about people running or hiding or fighting the Germans and from Hitler. This is the first book I've read that has been about people running from Stalin to Germany. Getting more info from the Eastern European countries was a welcome change. The war happened to them too but on both sides, each having horrible dictators. This was also the first time learning of the ship Wilhelm Gustloff, which was a tragedy that was six times deadlier than the Titanic, and I couldn't believe this was the first I've heard about it.

Ruta Sepetys writes amazingly well. The book is broken up into the perspectives of each of the main characters, each chapter being a new perspective on what's happening and why that character is running. And it's so SO good. I did not want this book to end, but at the same time, it took everything in me to NOT skip ahead to make sure that nothing bad happened to the characters I immediately fell in love with. It can't be easy writing a book with four different perspectives to keep track of, and she blew it out of the water.

When you pick this book up, make sure you have tissues handy because it's a doozy.

For more information on Salt to the Sea by Ruta Sepetys, come in and see us or visit our website here.
at September 04, 2018