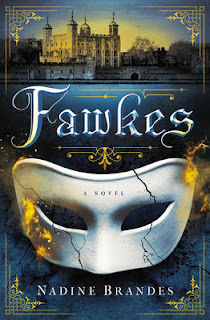 I've always had an odd sort of fascination with masquerade masks. I judged this book by its cover, snatched it up, and delighted in the concept. The masks are used to signify an individual who has a level of control over a certain colour, and each colour is used to manipulate different parts of the world around them. It's called Color Power and it leaves a divide so strong between two schools of thought--the Keepers and the Igniters--that a silent war breaks out. Each side blaming the other for the mysterious Stone Plague destroying England's people and beyond, this war is carried out in dark alleys behind masks, with hidden knives. The Igniter king of England, King James, calls for the death of the Keepers--that they should hang by the neck until dead.

Thomas Fawkes is a young man on the cusp of coming-of-age to receive his mask--if he can pass his Color Test at St. Peter's Color School, and if his father shows up to give him his mask. Unbeknownst to his teachers and most of his classmates, Thomas is a Keeper. What follows is a story of intense betrayal, blackmail, murder plots, value and worth, and the thin line between what is convincing and what is right.

Fawkes is more than a coming-of-age story. Nadine Brandes asks questions of race, wealth, and politics as she unravels the building war between Keepers and Igniters. She weaves in pieces of history with the story of Guy Fawkes in 17th century London. The first time Thomas Fawkes meets his father, Guy Fawkes, he's plunged into a plot to kill the Igniter king. The plan: to use 36 barrels of gunpowder to blow up Parliament.

There's a Romeo-Juliet type twist to this story, not to mention a great deal of mystery, suspense, romance, and conviction. The characters are diverse and engaging, and the prose should appeal to teens, especially ages 14-18. Another exciting YA book for the shelves--join Thomas Fawkes in the plot to kill the Igniter King.

For more information on Fawkes by Nadine Brandes, visit our website here.
at July 16, 2018