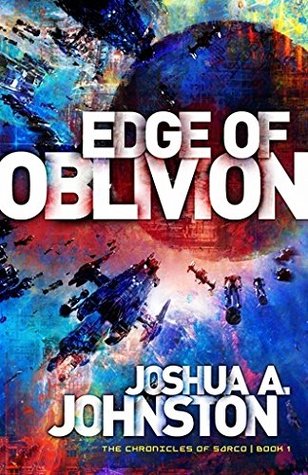 As a lover of science, I find it easy to lose time reading a good science fiction novel and Edge of Oblivion by Joshua Johnston definitely makes that list. Not only is the story line engaging but, with a good basis in the Christian worldview, Johnston has created a world that is so well established within itself you can’t help but believe it could be real. He includes alien races that each have their own distinctive culture and history and yet also have their own messianic figure that taught a very similar message and were persecuted to the same degree. With Earth’s history lost in what is known as the Dark Ages, the “Christ” figure spoken of is Sarco, who came to the Aecrons (EYE-a-cron-s), one of the 5 races that make up the Confederacy, 5 or 6 thousand years before our story begins.

As the Confederacy is rocked by the destruction wrought by an unknown enemy that seems unstoppable, Naval Commander Jared Carter and his crew are sent on what appears to be a wild goose chase across the galaxy to investigate the fragments of an ancient parchment they hope may hold the key to stopping the greatest evil any of them have ever known.

One of the things I appreciated most was the way Johnston works with the idea of faith. Jared describes himself as ‘not a theist’, but throughout the duration of the story he is both accepting of the faith of others and open to learning from them.

Another is the realistic nature of the faith of the Sarconians, those that choose to follow Sarco. While good and evil are apparent, and the Sarconians are very reminiscent of the early church, there is no ‘holier than thou’ vibe. I can see this aspect appealing to newer believers, teenagers, and those who want to read fiction without feeling preached at.

Throughout the entire book there is one overarching theme that I think is best summed up by one of the Sarconians who ends up traveling onboard Jared’s ship for a time:

“Hope is a powerful thing, Commander. Never forget that.”

For more information on Edge of Oblivion by Joshua Johnston, visit our website here.
at July 02, 2018