Far Side of the Sea


Colin Mabry was briefly introduced in Kate Breslin's other WWI novel Not By Sight as the brother of Grace, that novels' heroine. In that story, he goes missing in action in the chaos of the European front. 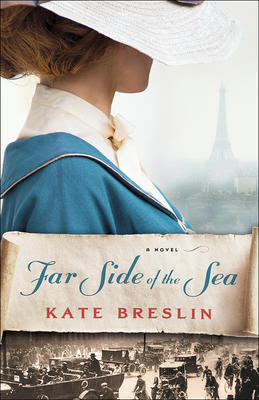 Picking up several months later, we find Colin attempting to come to terms with his new reality as an amputee; having lost his left hand in a tunnel collapse and haunted by memories of the terror he experienced. Colin is tasked with decoding messages delivered by carrier pigeons from France and he is shocked to receive a missive from Jewel (the woman responsible for once risking her life to save his, and one he long thought lost). Gathering the tattered remnants of his courage, Colin returns to France, determined to keep his youthful promise to rescue Jewel from the horrors of war.

But instead of Jewel, another woman awaits him in Paris--Jewel's half-sister Johanna, who is determined to find her long-lost sister with the help of the soldier who had once captured her sister's affections. Convinced her sister is in the clutches of a German spy, Johanna is desperate for Colin's help to find and free her sister. Colin reluctantly agrees to become Johanna's ally, and the two embark on a quest to find Jewel across France and Spain. But Johanna's fervor to find her remaining family, conceals secrets of her own. Ones if revealed, would threaten the tenuous connection building between herself and Colin.

This book is a combination of stunning historical detail, (the pieces regarding carrier pigeon use during WWI are fascinating) full of action, adventure, suspense, mystery and romance. Breslin seamlessly weaves together all of those elements, leaving you frantic to read the pages as quickly has possible. The emotional themes Breslin deal with in these pages are gutting; (i.e. PTSD, illegitimacy, violent rebellion) and in lesser hands would risk seeming melodramatic of cheap. But Kate Breslin is a master at unraveling emotional turmoil and depth with nuance and compassion, leading her characters through their respective valleys toward hope and restoration.

I loved the characters and how their faith and stumbles helped them grow and change throughout the story. Despite his disabilities and the challenges those pose to him in his everyday life, Colin forges through, trusting God is good even when things seem dark. A lesson we all need to be reminded of.

For more information on Far Side of the Sea by Kate Breslin, visit us in store, or visit our website here.